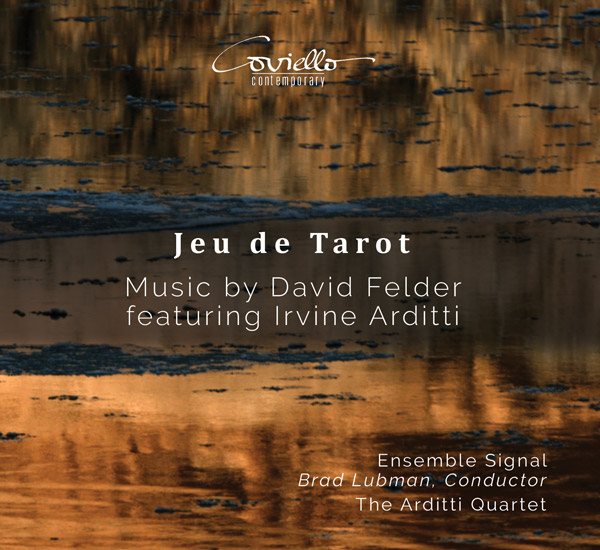 The music of David Felder is often imbued with esoteric, mystical, spiritual or philosophical themes. These have become more apparent in recent works (such as Requiescat for ensemble and electronics, and the trilogy for voice, electronics and video, Shamayim, in addition to the works on the present disc) but, as he argues in a 2015 interview with fellow composer Ethan Hayden, those elements have always been there. They’re just a little more overt now.

Yet even within those parameters Jeu de Tarot, his chamber violin concerto for Irvine Arditti and Ensemble LINEA, offers an intriguing question. (Its title nods towards Stravinsky’s ballet Jeu de cartes, but the similarities end there.) The work is divided into seven movements, each named after one of the 22 cards of the Major Arcana of a Tarot deck: the cards most commonly associated with representations of the Tarot. They are, in order: The Juggler (known in other sources as The Magician); The Fool; The High Priestess; The Hermit; The Empress (Whorld), this movement being named after two cards; The Hierophant (known in other sources as The Pope); and Moonlight. Each movement depicts a scene evoked by portrayals of each of these characters, especially those described by the Russian esotericist Pyotr Demianovich Ouspensky in his A New Model of the Universe of 1917. Such illustrations are highly symbolic, crowded with internal and external references, requiring a lifetime’s study to interpret to their fullest.

The question is this: As listeners, how deep into those representations should we go? Is movement 1, The Juggler, a musical evocation of Will – the divinatory meaning of that card? Can we hear Deception in movement 7, Moonlight? Does movement 3 show us the High Priestess, guardian of knowledge, sat between two temple pillars, one black the other white, as Ouspensky describes her?

You may also like these titles from the Edition Coviello Contemporary: