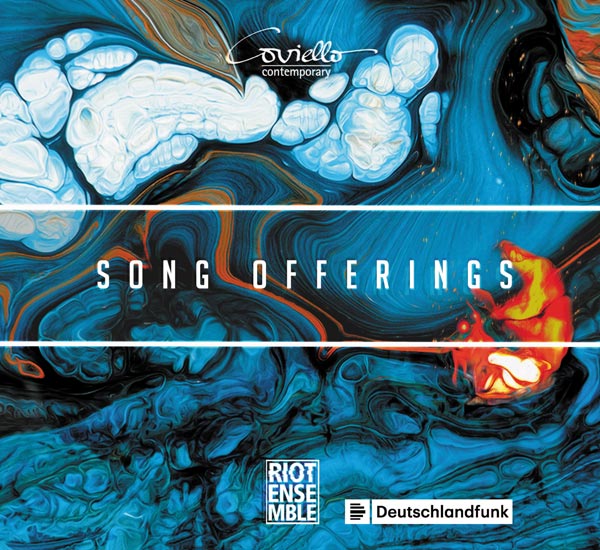 Song Offerings is Riot Ensemble’s fourth studio album, and a co-production between Coviello Contemporary and Deutschlandfunk. Riot’s previous album, Speak Be Silent, was internationally acclaimed, and named one of 2019’s best recordings by Alex Ross in the New Yorker.

These works are brought to life spectacularly by the Riot Ensemble. Its performances are uniformly excellent, combining precision and warmth, understanding and assurance. The recording is incredible – close, clean and big, uncluttered with no hint of brittleness in the upper registers – allowing the manifold sonic nuances to breathe. A most impressive release.
– Lisa Mackinney, Limelight, July 2019

The present CD was recorded at Deutschlandfunk Cologne, and presents four ‘song cycles’ from British composers. The title track is Jonathan Harvey’s masterwork Song Offerings. This piece formed the centre of Riot Ensemble’s first professional performance in 2012, and is presented here with a sister piece composed by Riot’s artistic director and conductor Aaron Holloway-Nahum. Plane Sailing has the exact same instrumentation as Harvey’s work, and is dedicated to him. Alongside these two works is Laurence Osborn’s Micrographia (with text by Joseph Minden, commissioned by Riot Ensemble in 2017), and intersperced throughout the CD is Samantha Fernando’s song cycle for Soprano and Cello (How Many Moments Must, Utterance, and The Half Moon).