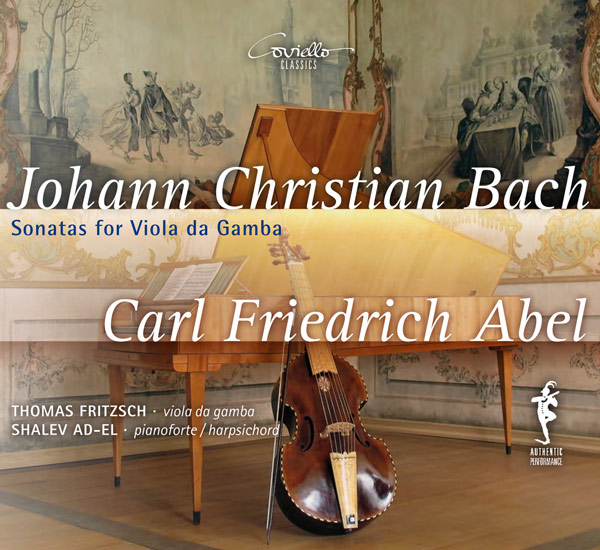 Anyone who is interested in the biography of Johann Christian Bach (1735-1782), the youngest son of Johann Sebastian Bach, immediately encounters the name Carl Friedrich Abel (1723-1787). Abel was born in a musical family that has been noted as viola da gamba players for three generations. In 1763 the two bachelors moved into shared room in a fashionable neighbourhood of Soho in the north of London. After two years Bach and Abel presented their popular subscription concerts which were the first of their kind in Europe. The close relationship between the two composers has inevitably raised the question of the whereabouts of Johann Christians Bach’s compositions for viola da gamba. On 29 May 1992 a previously unknown collection of manuscription was put up for harpsichord and viola da gamba and two sonatas for pianoforte and viola da gamba by Johann Christian Bach. They were sold to a private collector. Thomas Fritzsche received the composition from the collector along with permission to perform them. On this reoding Thomas Fritzsche and Shalev Ad-El played them in alternation with Abel’s Prussian Sonatas – coming full circle after two and a half centuries. Johann Christians Bach’s sonatas are typical of the keyboard sonatas accompanied by flute, violin or as here viola da gamba that became popular during the last quarter of the 18th centuries. In this four sonatas Johann proved to be a modern, innovative composer. On the one hand the two-movement formal structure he has used was ideally suited to the musical taste prevalent in London; on the other hand Bach chose an instrument which was increasingly falling out of fashion.

[cl-review quote=”… anyone interested in J. C. Bach, Abel, or late gamba music in general will need to acquire this CD. Fritzsch and Ad-El are fine players, and make out a good case for the music. …” author=”(Elizabeth Macdonald in: VdGSA News 9/2012)” occupation=”” type=”quote” layout=”clean”]